I attended ‘Mom Prom’ with my son over the weekend and when I woke up Monday morning I couldn’t find my Fitbit anywhere. Since I had dressed up for the event I hadn’t used the wristband, but I was sure I’d laid the tracker on my nightstand – and equally sure that it had fallen off and been eaten by our little canine vacuum cleaner, Teddy. 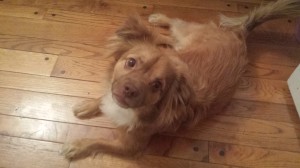 I’ve been wearing my Fitbit Flex every day for a little over a year and was pretty distressed at the thought of having to replace it – and what I would replace it with. Which naturally led me to ponder the pros and cons of the device…

On the plus side, I’ve found that wearing the tracker really does encourage me to move more throughout the day. Just tonight in fact, I was thinking about asking one of the kids to turn on the space heater in my bedroom so it would warm up before bedtime (old house unfortunately equals cold second floor bedrooms) but then I remembered that the class I have on Thursdays has me sitting for several hours during the time that I usually take a three mile walk so I figured I should make the quick trek upstairs and do it myself (yay me).

There was a time that I would walk the floors until midnight if I had to in order to fit my steps in, I don’t do that anymore because sleep is also important,  but I absolutely pay more attention to my activity level.

I also love the silent alarms, you can program up to eight of them and since the repeat function is comprehensive I use the alarms to remind me to do my Minute Movements. The sound of the alarm on my phone was always jarring and irritating to me, which didn’t actually help me develop the habit of doing the movements; but when I realized that I could set eight alarms that would simply vibrate on my wrist a few times I was thrilled (and that was when I began consistently doing my movements)!

The sleep tracking option is also useful. I’ve always had some difficulty sleeping and often wake up feeling tired so seeing my restless times is interesting. That said, there’s something about wearing the tracker 24/7 that bothers me (electronic waves and all that) so I usually take it off while I sleep just to be safe – it’s not like wearing the Fitbit was  helping me sleep better, it just confirmed that I don’t!

But not everything is perfection in Fitbit land. I don’t love that the device has to be re-charged (some don’t) and even though the battery lasts about five days it still irritates me to have to plug it in – but not as much as it irritates me to realize that the battery died hours earlier and my steps haven’t been tracked!

I have always enjoyed jewelry and am a bit of a girlie-girl so the plastic band really isn’t my favorite. While it’s fine when I’m wearing workout gear and I recognize that the band protects the tracker I’d really prefer something that looks a little more classy to wear with my ‘real clothes’. At the very least a band that looked similar to metal or leather. My black band ripped after only about six months so now I’m stuck wearing a navy band and searching Etsy for cute alternatives. Since my tracker was missing, I kicked around the idea of replacing it with one of the newer models that have a watch display since I now look for the time on my Fitbit band, but they look much more bulky and I’m not sure I’d like that.

I’ve heard complaints about the accuracy of Fitbit and I will absolutely admit that mine has buzzed to tell me that I’ve hit all of my steps while I was folding laundry. I move a little bit during that chore but not so much that I would count those movements as ‘steps’ . I usually take off my Fitbit when I’m doing a lot of paperwork just in case it sees my movements as ‘steps’. BUT the point of the Fitbit is that I have a good idea of my activity, is it really necessary that I have exact number of steps that I walked that day?

Overall I recommend using a fitness tracker to help you become mindful of your daily activity – something we encourage with our program – and I think the Fitbit Flex is completely adequate at a reasonable price (about $100).

Fortunately, after a day of looking in the same exact places 37 times and racking my brain (oh, and listening for the little dog to buzz at the top of every hour) I put my hand in the pocket of my robe as I was getting ready for bed and there it was!

What about you? Do you wear a fitness tracker and do you like it?