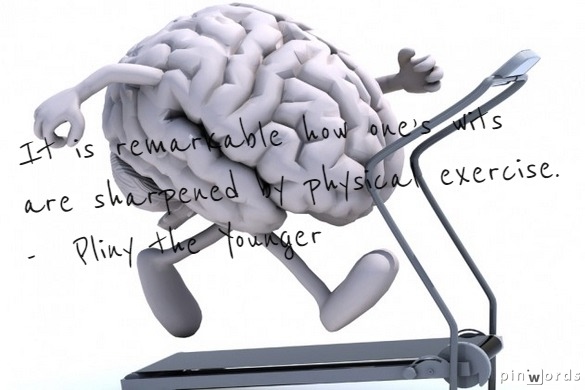 It is remarkable how one’s wits are sharpened by physical exercise.  –  Pliny the Younger

The mind/body connection is really sticking with me this week!

Tuesday I shared information about a study suggesting a correlation between midlife physical fitness and dementia in later life. Today I’d like to take a look back at our late teens and a study that ‘shows a clear link between good physical fitness and better results for the IQ test’, particularly ‘for logical thinking and verbal comprehension’. Of course, since the researchers looked at data from 1950-1976 they were also able to compare the results of the fitness tests (taken while the young men were participating in Swedish national service) to socioeconomic status later in life. Guess what – ‘Those who were fit at 18 were more likely to go into higher education, and many secured more qualified jobs.’  So exercise makes you successful? 🙂

I have read several other articles that indicate that being physically fit (and making sure our brains get plenty of oxygen) positively affects our intelligence. This certainly turns the old stereotype of the ‘dumb jock’ on it’s ear doesn’t it? Although I’ve known plenty of smart athletes in my time.

Incidentally, the study says that ‘youngsters who improve their physical fitness between the

ages of 15 and 18 increase their cognitive performance’ so if you have teenagers who are getting a little sedentary ask them to join you on your next walk.